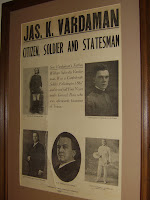 (To the right you see a late-career campaign poster from James K. Vardaman from the early 1920s, one of my prized possessions of Southern political memorabilia)

A nonviolent strike by inmates at seven Georgia prisons has evoked one of the South's long-held and darkest traditions while incorporating the latest technology at the same time.

The inmates at Smith State Prison in Downing and elsewhere across the state told the New York Times that they were able to coordinate their protest through use of "contraband cellphones" that allowed text-messaging as a means of communication. Inmates were able to purchase the cellphones from guards and other sources, often at exorbitant prices.

The key issues behind the strike are inmate demands that they be paid for work they do in the prison system and that deteriorating living conditions be improved. They also want more focus on rehabilitation, such as educational programs. The Georgia Department of Corrections' response thus far is a lockdown at four of the prisons.

The familiar story of miserable conditions within Southern prisons has become the stuff of Hollywood, with movies such as I Am A Fugitive From A Chain Gang and Cool Hand Luke depicting a South with plenty of uniformed sadists always ready to use their power and fulfill their darkest needs to chain, beat, and whip those helpless to oppose them.

Beyond their use of cellphones and complaints about prison conditions, the inmates and their insistence that they be paid for their work reminded this writer of an age-old issue in the South: private profiteering from prison labor.

It evokes a South that's perhaps not as "new" as we'd like to think. Using prison labor for private profit was a key issue in turn-of-the-(20th) century Mississippi, where--irony of ironies--one of the South's most notoriously racist politicians, Gov. James K. Vardaman, pushed through major reform legislation that ended convict leasing and improved conditions at the state's notorious Parchman prison.

"I am more interested in the salvation of men than I am in hoarding gold," Vardaman said, protesting "money coined out of the blood and tears of the unfortunate convicts."

Conditions were indeed bad. Investigators found inmates doing farm labor for the privately owned land of prison officials, sick inmates confined to a ward where broken windows exposed them to freezing temperatures in the winter, and, in one case, an inmate forced by a guard to kill another inmate.

As retold in Albert D. Kirwan's book, Revolt of the Rednecks: Mississippi Politics, 1876-1925, Vardaman told Mississippians that even a "low-bred, vulgar creature, congenitally corrupt, inured to physical and moral filth" deserved "kindly treatment, a decent bed to sleep on, and sanitary surrounding."

He decried prison conditions "rivaling in brutality and fiendishness, the atrocities of ... Torquemada."

Vardaman, a striking figure on the campaign trail with his long black hair, white suit, and black hat, provides a classic example of Southern contradiction in politics. Known as the "Great White Chief", he was a horrible racist when campaigning, even supporting the lynching of blacks. As an office-holder, however, he was remarkably progressive for his time and even acted to prevent the lynching he supported as a candidate. He supported restrictions on child labor, fought the all-powerful railroad companies and other big corporations, created a state textbook commission and thereby ended the American Book Company's monopoly. Vardaman even increased educational funding for blacks.

However, Vardaman's racist diatribes on the campaign trail--imitated and perhaps even exceeded by his understudy, Theodore G. Bilbo--will forever mark and darken whatever positive achievements he attained.

Nevertheless, some of his reform spirit as regards prisons might be worth re-visiting these days as governments continue to look to private prison-operating companies to do the work that they themselves should do, and, as I've written before, another "dark piece of the Old South that's still there" threatens to resurrect itself--even if it never really went away.
Posted by Joseph B. Atkins at 3:52 PM