Will the real Fascists please stand up? 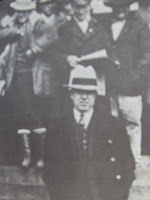 (The photograph to the right is of Huey Long at a parish courthouse in Louisiana. It is from T. Harry Williams' collection and was included in his 1969 biography of Long.)

Huey P. "The Kingfish" Long, the boss of Louisiana politics until an assassin’s bullet ended his reign in 1935, once was alleged to have said this about politics and fascism in the United States: “When the United States gets fascism it will call it anti-fascism.”

Often referred to as a fascist would-be dictator himself by his detractors, Long may have been a prophet as well as political strongman. For all the fear of socialism and communism generated by the corporate state and its army of sycophants, the real danger to democracy in this country has always been fascism.

The right-wing noise-makers who turned last year’s health care town hall meetings into screaming matches loved to wave posters depicting President Obama with a Hitler mustache. Their successors, this year’s Tea-Party protesters, have gone so far as to evoke the Nazis’ Dachau concentration camp in describing the end result of health care reform.

Egging them on, of course, are the pundits and talking heads on Fox News and its imitators. Ann Coulter, the syndicated columnist who thinks history has falsely vilified 1950s anti-communist demagogue Joe McCarthy, has equated Obama’s book Dreams From My Father with Adolf Hitler’s Mein Kampf.

Huey Long would enjoy the irony. After all, Coulter, Limbaugh, Michael Savage, and the newest darling of the ultra-conservative camp, television and radio commentator Glenn Beck, are in some ways the modern-day equivalents of Father Charles Coughlin, the Depression-era “radio priest” who railed against Jews, international bankers, and Franklin D. Roosevelt to a national audience.

Unlike his successors, however, Coughlin included big corporations in his litany of evildoers, something Coulter, Limbaugh and company would never do. The loosely organized movement they espouse is financed in part by corporations. For example, Freedom Works, a powerful Tea Party ally led by former House Majority Leader Dick Armey, owes corporations for as much as one-fifth of its budget. Right-wing Christian groups get significant support from companies like Wal-Mart and Tyson Foods.

So what exactly is fascism? The Adolf Hitler and Benito Mussolini brand—enthusiastically endorsed by many U.S. industrialists before the war, by the way--was essentially a corporate state in which government worked hand-in-glove with industry to control the lives of citizens. Unions were abolished, workers became serfs, citizens’ rights were history, and the elite prospered. Fascism “is not a philosophy, it’s a spoils system,” said journalist George Seldes, who chronicled the movement.

To find out who today’s real fascists are, let’s turn to right-winger Glenn Beck, who recently called on listeners of his radio show to leave their churches if they hear words such as “social justice” and “economic justice”. Beck claims these are code words for communism and socialism. Yet, if anything was anathema to the fascists of 1930s Germany and Italy it was those same words.

Mississippi, where I live, and the U.S. South have always been fertile soil for those with fascistic impulses. Mississippi even had its Gestapo-like agencies—first, the anti-labor union “Missisisippi Bureau of Investigation” that my colleague, the longtime columnist Bill Minor, exposed to the world way back in 1947, and then its successor, the segregationist Mississippi Sovereignty Commission. Both were state-run spy agencies that cracked down on dissidents.

Klan membership is on the rise again in Mississippi, which now ranks just behind Iowa and even with Louisiana in Klan activity. Nationwide, the number of extremist anti-government groups has jumped 244 percent in the past year, according to the Southern Poverty Law Center. People are hurting in today’s economy, and many are eager to lash out against the nearest scapegoat, whether it’s the government, immigrants, or liberals. Corporations get a free ride from Tea Partyers, town hall screamers, and Glenn Beck.

In a 1944 interview with the New York Times, Vice President Henry Wallace offered this definition of U.S. fascism--and it’s still a pretty good one. “They claim to be superpatriots, but they would destroy every liberty guaranteed by the Constitution. They demand free enterprise but are the spokesmen for monopoly and vested interest. Their final objective … using the power of the state and the power of the market simultaneously (is to) keep the common man in eternal subjugation.”
Posted by Joseph B. Atkins at 7:04 AM