A life or death fight for workers' rights in a deeper South: Mexico 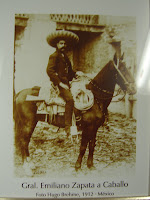 Three years after the revolution he helped launch in Mexico, Emiliano Zapata (seen to the left on horseback in a 1912 photo by Hugo Brehme) issued this warning in a letter to the military leader General Victoriano Huerta: "The Revolution has not triumphed. ... In your hands still is the will and the power to save it; but if, unfortunately, you do not, the shades of Cuauhtemoc, Hidalgo and Juarez and the heroes of all times will stir in their tombs to ask: What have you done with the blood of your brothers?"

Today, the ghosts of Zapata, Pancho Villa, and the revolutionaries and visionaries Zapata invoked in his letter are indeed stirring as the government of Felipe Calderon wages war against the workers whose struggles were the very cause of the revolution in the first place --ironically in the centennial of that revolution's beginning.

In a struggle far to the south of the U.S. South but very much worthy of attention on this side of the Rio Grande, the Mexican Mine and Metal Workers Union and the Mexican Electrical Workers Union are in a life or death fight as they dig in against efforts by the Calderon regime to destroy both. It's a battle being duly reported by the United Electrical Workers (UE) in the United States--a union that has long worked closely with its Mexican counterparts--but which is largely being ignored by a U.S. media much more focused on the drug wars along the border between the two countries.

The 13,000 mine workers at the Cananea copper mine have been on strike since 2007 in protest against the poor safety standards in the mines and the lack of concern of the mine owners, Grupo Mexico, standards that experts believe have been a factor in lung disease among the miners. In 2006, an explosion at Grupo Mexico's Pasta de Conchos mine killed 65 miners. The explosion came after the union complained of safety problems at the mine. Grupo Mexico has yet to compensate the families, the UE reports.

State agents shot down three unarmed strikers in 2008, and Grupo Mexico has asked that the army step in again to bring the strike to an end. Union leaders are convinced that the Calderon government is indeed preparing a major intervention, and that a bloody battle is bound to be the result. Ironically, the same mine at Cananea was the site of a 1905 strike, and the subsequent killing of 27 miners there became a rallying cry in the 1910 revolution.

That revolution, by the way, was fought to free the people of Mexico from a feudal society controlled by the hacendado who lived lavishly in the cities but owned giant estates in the countryside where the majority of Mexicans worked as sharecropping peasants. These haciendas were much like the plantations of the ante-bellum (and post-bellum) U.S. South.

The Mexican government's other anti-union war has been against the Mexican Electrical Workers Union (SME), and it reached a low point several months ago when Calderon "sent the police to occupy the electrical facilities in central Mexico, liquidated the state-owned Light and Power Company, and terminated 44,000 workers," the UE and the Mexico-based Authentic Labor Front said in their February report, Mexican Labor News and Analysis. Calderon moved to destroy the militant SME so he could replace it with the more government-friendly union, the Sole Union of Electrical Workers, and thus continue with his push toward his ultimate goal: the utility's privatization.

These actions have led to calls for a general strike--possibly as early as March 16--and to demonstrations by thousands of teachers, farmers from the state of Chiapas, and other workers. You may not have read about these events before now because this is not the kind of news you typically find in the mainstream U.S. media. The alternative press is doing its best to fill the gap, and that includes Labor South.
Posted by Joseph B. Atkins at 4:51 PM