Hardboiled Champions of the Little Guy 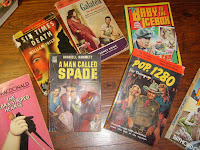 I've been a lover of the hardboiled school of American writing since the 1980s, when I first picked up a copy of Raymond Chandler's Farewell, My Lovely. Chandler led me to Dashiell Hammett, who led me to W.R. Burnett's The Asphalt Jungle and James M. Cain. From there I gravitated to Jim Thompson, Cornell Woolrich, and Ross MacDonald. I fell in love with their street-wise, lean-to-the-bone writing style, their edgy, existential view of life, and their empathy with the little guy, the people who get pushed around.

At last, I told myself, here are writers working in an original American style that has the grit and gristle of real life. Like Chandler said in his homage to Hammett, The Simple Art of Murder, these writers tell of a world where "gangsters can rule nations and almost rule cities ... where a judge with a cellar full of bootleg liquor can send a man to jail for having a pint in his pocket, where the mayor of your town may have condoned murder as an instrument of money-making."

These were writers with a strong sympathy for the working stiff. In fact, November 2009 will mark the 70th anniversary of the publication of Jim Thompson's Labor History of Oklahoma. Thompson, the most hardboiled of all the hardboiled novelists, had been a hobo, oil rig roughneck, member of the IWW Wobblies, drifter, and avid reader of Karl Marx and Jack London before he made his mark in fiction. He also read the Bible, and agreed with the pro-labor, Depression-era Rev. Lawrence Lay that it was "the poor man's book; its message is the voice of God against tyrants, idlers, and parasites." Read Robert Polito's great biography of Thompson, Savage Art, for the rest of that damned good story.

Dashiell Hammett, author, of course, of The Maltese Falcon, was a Marxist yet a sharp critic of both the Soviet Union and American Communist Party at the same time. He'd been a union buster as a young detective with Pinkerton--once even offered $5,000 to kill the legendary labor organizer and martyr Frank Little. That past haunted him, but he more than made up for it as a supporter of the Loyalists in the Spanish Civil War and an enemy and victim of Joe McCarthy's witch-hunt later in life.

James Cain was a labor writer before he became famous as author of The Postman Always Rings Twice. He made a name for himself covering the struggles of coal miners in West Virginia, earning his writing stripes as a hard-nosed reporter covering working people and their lives. Ross MacDonald expressed his sympathies through his fictional detective Lew Archer. In The Ivory Grin, a woman asks Archer, "You are on our side, Mr. Archer?"

"The side of justice when I can find it," Archer responds. "When I can't find it, I'm for the underdog."

Read Cornell Woolrich's premier scholar, Francis Nevins, on that modern-day Poe's view of the Depression: "For Woolrich, (the Depression) means a frightened little guy in a rundown apartment with a hungry wife and children, no money, no job, and desperation eating him like a cancer. The dominant political reality is a police force made up of a few decent cops and a horde of sociopaths licensed to torture and kill, whose outrages are casually accepted by all concerned, not least by the victims."

The list goes on. Two other writers deserve mention. They didn't come out of the genre but are definitely fellow travelers. Nelson Algren, author of The Neon Wilderness and other classics about Chicago's mean streets, once had this to say:

Maybe the best line goes to an Englishman, Eric Ambler, the author of A Coffin for Dimitrios and a half-dozen other haunting, Angst-laden pre-World War II classics. Writing about war, he said, "It is not important who pulled the trigger, but who paid for the bullet."

I've long been a collector of old hardboiled novels from the '40s, '50s, and later, and you'll see a few of them in the accompanying photograph. These writers left their mark. You see it in the work of modern-day writers like Pete Dexter, William Kennedy, and my friend Ace Atkins (no relation). In fact, read Ace's latest novel, Devil's Garden, which deals with Hammett, Little, and silent film star Roscoe "Fatty" Arbuckle.