Why aren't reporters asking about peace negotiations in Ukraine? Why isn't Joe Biden pushing for peace instead of more weapons? 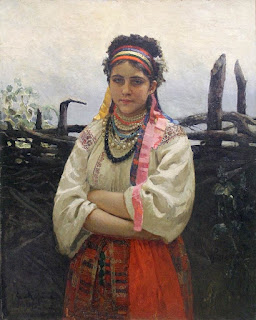 (To the right, a painting of a Ukrainian woman by Ilya Repin, considered by many Russia's greatest painter. Repin was born in Ukraine.)

It was the summer of 1992, and the embers of Russia’s 70-year experiment with communism still smoldered. Near Red Square in Moscow protesters called for a return to the glory days of the dismembered Soviet Union. One of the clearest signs of that dismemberment was near the city’s Tretyakov Gallery, where the paint-smeared, uprooted statues of Stalin and other Communist leaders lay helter-skelter on the ground.

Our guide, 25-year-old university student Roman Fiodorov, always a sly grin on his face, waxed philosophical. “Systems are different, but people are the same. People just want a (normal) life.”

I’ve been thinking back to that trip to Russia that my wife and I made back in 1992. It became an important experience in my life, a turning point, in many ways, prompting me into a years-long obsession with Eastern Europe. What followed were three trips to Poland, other trips to Slovakia, the former East Germany, sponsored visits of students from Slovakia, Bulgaria, and Albania to the University of Mississippi, where I teach. I studied Russian for two years and Polish for one.

It also led to a lot of writing, including my first book, The Mission: Journalism, Ethics and the World (2002), which drew comparisons between Eastern Europe and my native U.S. South. I railed in newspaper columns against NATO’s bombing of Serbia in the former Yugoslavia in 1999 allegedly on behalf of the Kosovar Albanians. It was an illegal and unnecessary war given the fact that then-Yugoslav President Slobodan Milosevic had already agreed to allow Kosovo autonomy.

Watching those developments closely were the leaders of post-communist Russia, which had agreed to the reunification of Germany after NATO promised not to expand eastward. As the years passed, however, Russia also watched as NATO broke its promise again and again, expanding to Russia’s very doorstep, with even Ukraine wanting to join and given encouragement by U.S. officials.

Today, Ukraine is the blood-soaked victim of, yes, a brutal Russian invasion but also of the U.S.-led NATO’s relentless push to preserve the United States as the world’s lone superpower and to mock Russia’s security concerns about the Western military buildup on its borders.

You wouldn’t know the complex backstory to this invasion by reading, watching or listening to mainstream, corporate-owned media in the United States and Europe. What you get from their alleged journalists is the same old jingoistic claptrap that comes with every war—the demonization of Russia and Russians, even including Russian opera singers and athletes as well as Vladimir Putin, the reporting of every claim from the Ukrainian side and the parroting of endless U.S. military speculation about the war, whether validated or not, and the glorification of so-called heroes like Ukrainian President Volodymyr Zelensky, who has repeatedly called for a “no fly zone” over his country and other Western interventions that likely would cause a global nuclear war.

Where are the questions from journalists about peace negotiations? To his credit, Zelensky had indicated his willingness to relinquish Ukrainian hopes to join NATO, a key Russian demand, but the last thing the U.S. oligarchs of the military-industrial complex and the Deep State in Washington, D.C., want is any semblance of a Russian victory. What they want are more weapons to be poured into Ukraine, continuing the war until the Russians give up or the last Ukrainian is dead. They want a humiliated Russia that can never challenge the United States’ status as the world’s only superpower. Once they’ve taken care of Russia, then they can focus on China.

President Biden seems utterly in the throes of the Deep State, and perhaps now he has been forgiven for ending the war in Afghanistan. Spending billions of taxpayer dollars on weapons for Ukraine goes a long way toward getting forgiveness. By the way, why does the Deep State still have credibility after its dismal failures in Vietnam, Iraq, and Afghanistan, all U.S. invasions in which oceans of blood were spilled?

None of this is to paint Putin as anything but the autocrat that he is. I have no illusions about what lies within his capability. I would likely be in prison if I were a journalist in Russia.

Back in 1992, Roman Fiodorov, again grinning, made a comment to us tourists that spoke more truth than perhaps intended. “You Americans,” he said with a shake of his head, as my memory recalls. “Two people are killed in a car wreck and it’s on the front pages of your newspapers. Here in Russia, hundreds disappear in Siberia, and no one says anything.”