A trail of broken promises, a U.S.-backed coup, and war-mongering politicians and weapons manufacturers contributed to the current crisis on Ukraine's border 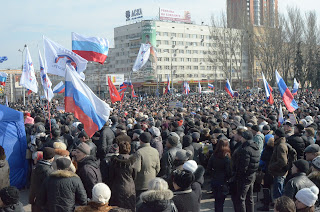 NATO and the United States assured Russia in 1990 that the organization did not seek military expansion into the former East Germany or in any way that would threaten Russia. Today, NATO includes Poland, Slovakia, Romania, Bulgaria, Lithuania, Latvia, and Estonia, the last two sharing a border with Russia.

Over the past eight years, the United States alone has sent an estimated $2 billion worth of military aid to Ukraine. President Biden is now sending more U.S. troops into Eastern Europe as tensions rise over Russia’s military buildup on the Ukraine border.

The CEOs of the weapons companies Raytheon and Lockheed Martin are telling investors that the Ukrainian standoff means more profits for their companies.

A U.S.-backed coup in 2014 ousted pro-Russian Ukrainian President Yanukovich and and replaced him with a pro-Western president. The coup featured a mob attack on the nation’s parliament much like what happened in Washington, D.C., on January 6, 2021. Neo-Nazis were prominent in the coup, and they still have a presence in the current Ukrainian military.

It was the 2014 coup that set the stage for Russia’s annexation of Crimea and behind-the-scenes backing of pro-Russian secessionists in Luhansk and Donetsk in eastern Ukraine. Russia's Vladimir Putin wants assurances that Ukraine will not become part of NATO.

Joe Biden has had his hands in Ukrainian affairs for a long time. He was Barack Obama’s go-to-guy on Ukraine during Obama’s presidency. That likely is why Biden’s son Hunter got such a lucrative deal earning $1 million a year as a board member of the Ukrainian energy company Burisma. Burisma cut Hunter Biden’s wages in half after his dad left the vice presidency.

Biden and both Democrats and Republicans in Congress are waving their bloody swords over the Russian troop buildup on the Ukrainian border, but how did their predecessors feel when the old Soviet Union wanted to put missiles on Cuban soil back in 1962?

The current situation comes after a long series of broken promises, including Ukraine’s own promises to grant greater autonomy to Luhansk and Donetsk in the now-ignored Minsk-Normandy agreement in 2015.

Russia has a sordid past in its relations with the Ukraine, and this column isn’t trying to claim Vladimir Putin is some kind of hero. He’s not. However, the people of the United States are sick and tired of the perpetual war that the Pentagon, its buddies Raytheon and Lockheed, and warmongers in the Congress seem to want.

The American people are as sick of lies as they are of war, and all the smiles on the faces of the Raytheon and Lockheed bosses, the saber rattling of their buddies in Congress and the White House, and the sycophantic coverage of the corporate media are not going to change that fact.