Is the U.S. South a different nation? A Journey into Deep, Dark Dixie 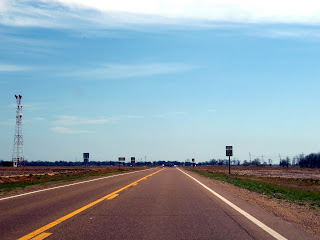 (Highway 49 in the Mississippi Delta)

The journey was something out of an Eric Ambler or Graham Greene novel. It was roughly 20 years ago, and I was on a train from Krakow, Poland, to Bratislava, Slovakia. My mission was to meet with journalist Pavol Mudry to hear his tales of dealing with Slovakian strongman Vladimir Meciar, who had done his best to destroy Mudry’s Slovak News Agency (SITA).

I had left sunny Krakow, where black-robed priests walk the ancient streets of the Stare Miasto, the city’s Old Town, and where steel workers at the giant Nowa Huta factory joined with shipyard workers in Gdansk to create Solidarity and bring down the brutal communist regime and breathe political freedom back into Poland.

I traveled through the night to a darker place than Poland, one where the threatening shadows of post-communist demagogues like Meciar still loomed over the land. I didn’t speak Polish but I did know a little Russian. When I tried to speak it, people just stared at me coldly. My good Polish friend Ala Kopycka from Lodz later told me, “Joe, don’t speak Russian in Poland.”

Late in the night, the train stopped at some remote station, and a peasant woman carrying a huge sack of potatoes came into my train car and sat across from me. She had a broad, pleasant face and began talking to me in Polish as if I were a native. I simply smiled, nodded, and acted as if I knew what she was talking about.

Pavol met me at the station in Bratislava and became my tour guide through the city, where what were likely Meciar goons had broken into SITA headquarters and stolen its computers and other equipment. The police never investigated.

I thought about my Slavic adventure recently after reading a couple recent articles about my native South, itself an exotic outpost in the USA where political demagoguery and authoritarian impulses have made it at times practically a nation on its own, yet one with a profound impact on the rest of the country.

I’ll never forget reading years ago Sally Belfrage’s 1965 book Freedom Summer, her account of traveling to Mississippi along with other idealistic young people who’d trained in Ohio and come south to register black voters and fight racial segregation in 1964.

“(We) were behaving as warily as a band of illegally documented refugees on the Orient Express approaching a forbidden Balkan border. The night seemed peaceful enough, but the change from light to dark was becoming substantive, and everything ahead was dark. SOUTH! … Flat, endless Delta land of cotton, straight two-laned road, monotony, with only an occasional shack to interrupt a landscape that was a visual forever. … At a crossroads, pointers to towns named Savage, Coldwater, Alligator. The heat was still and dazzling … a weird silence, which seemed to spread outward without an end.

"The country was foreign, resembling Spain or Syria or anywhere where heat and poverty combine to overwhelm attempts at the streamlined."

Mississippi and the rest of the South might seem much less threatening today, but a difference remains, certainly in the eyes of Maine-based writer Wayne O’Leary.

The sharp divides that have split the nation go far beyond urban-rural differences, O’Leary wrote recently in the Texas-based Progressive Populist. “The split is between the South, the states of the old Confederacy (along with some border states), and the rest of the country. It’s a division that’s been there since the Civil War ended in 1865, but lately it’s become an ever-widening chasm impossible to bridge except with the utmost difficulty. Differing values and beliefs that have coexisted uneasily well over a century have become seemingly irreconcilable under the psychic pressure of the Trump years and can’t be smoothed over.”

A once Solid South for the Democratic Party is now solidly Republican. Fundamental Christians, anti-vaccers, union busters, and Trumpsters rule the land. “Donald Trump … appeals to something deep in the Southern psyche,” O’Leary writes, and the South “threatens to drag down the rest of the country in the process of acting out its bizarre conception of `freedom.’” Freedom, for these Southerners, means no COVID-19 vaccine mandate and free-range to Republican legislators who want to suppress voting by minorities and others who might threaten their rule.

Legislators in some non-Southern states like Wisconsin and Ohio are pushing bills that would re-open the doors to child labor to offset the current pandemic-spawned labor shortage, an idea bound to resonate in the South where children once slaved at textile mills across the region.

Still, Mississippi AFL-CIO President Robert Shaffer “dreams of another Operation Dixie to produce a new generation of believers” in labor unions and progressive legislation, according to a recent article on Southern labor by Hamilton Nolan in In  These Times.  Operation Dixie was a massive labor organizing campaign in the South in the late 1940s and early 1950s that largely failed.

Only problem is, Shaffer said, “I don’t got the power to do that shit.” Major union losses at Amazon’s Bessemer, Alabama, site and at the Nissan plant in Canton, Mississippi, brought home that fact.

Yet Southern workers clearly want a better South than the one they have now. The best way to achieve that end is through an organized workforce. Miners have gone on strike in Brookwood, Alabama. Other workers have struck in Memphis and Paris, Tennessee, Louisville and Dry Ridge, Kentucky. Nolan writes that “not a single person I met in Mississippi thought workers there could not be organized. Again and again, those on the front lines said with absolute certainty that labor organizing in their state—where workers are intimately familiar with racism, poverty and political hostility—is an opportunity just waiting to happen.”

Hope springs eternal. Even in the Deep, Dark South.