(To the left below, Shakespeare's Richard III as depicted by the 19th century artist Sir John Gilbert) 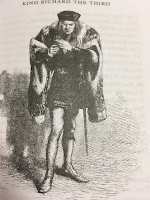 Ah, what a glorious hypocrite was the murderous King Richard III in Shakespeare’s 1591 play.

“Madam, so thrive I in my enterprise
And dangerous success of bloody wars
As I intend more good to you and yours
Than ever you and yours by me were harm’d!”

These were the tyrant’s words to Queen Elizabeth after he’d had her two young sons murdered along with a host of other victims of his relentless ambition to grab and keep the throne. With his hands drenched in blood, he even dares ask the queen if he can have her daughter in marriage! Here is her response:

“No doubt the murderous knife was dull and blunt
Till it was whetted on thy stone-hard heart,
To revel in the entrails of my lambs.”

What drives me to quote Shakespeare in this blog are the similarities of Richard’s hypocrisy and that of the United States in its relationship to Latin America. It’s a hypocrisy that mainstream U.S. media share--from the New York Times and the Washington Post to the major TV networks.

What country boasts more about freedom and democracy than the United States, and what country has worked harder to destroy both in the nations to its south? Memories of the CIA-backed overthrow of the democratically elected president of Chile, Salvador Allende, on September 11, 1973, came fresh to my mind when I heard of the recent coup in Bolivia that toppled the duly elected presidency of Evo Morales. President Trump, of course, immediately recognized the new military-and-police-backed regime that has already hammered down hard on protests and dissenters.

Of all the presidential candidates in the Democratic Party, only Bernie Sanders has called the overthrow what it was, a “coup”. Even anti-regime-change candidate Tulsi Gabbard has been reluctant to weigh in on developments in Bolivia. “I think Morales did a very good job in alleviating poverty and giving the indigenous people of Bolivia a voice that they never had before,” Sanders said at the Spanish language network Univision’s Democratic forum last month. “But at the end of the day, it was the military who intervened … . When the military intervenes … that’s called a coup.”

The near silence in the mainstream media is telling. Note how their coverage of protests around the world mainly focuses on the increasingly violent protests in Hong Kong against the Chinese government rather than the widespread protests in Haiti against the corruption of U.S.-backed President Jovenel Moïse, against billionaire Chilean leader Sebastian Piñera’s punitive hike in subway fairs, and against Equador President Lenin Moreno’s slashing of fuel subsidies.

Those protests have led to 35 deaths in Haiti and 19 in Chile. In Hong Kong one person has died during the protests. Mainstream media coverage reflects and upholds U.S. official policy. The Trump Administration, like its predecessors, wants governments in Latin America that are open to U.S. business, and it matters not if those governments are military juntas or dictatorships. Anything that makes China look bad is good for U.S. policy. Trump is waging his trade war with China because he wants the Communist government there to be just as corporatized as the U.S. government is.

“When official enemies can be presented as evil and allies as sympathetic victims, corporate media will be very interested in a story,” writes Alan MacLeod in EXTRA!, the newsletter of the FAIR media watch group. “In contrast, they will show far less enthusiasm for a story when the `wrong’ people are the villains or the victims.”

Many suspect U.S. agents to be encouraging the protests in Hong Kong that continue and grow even more violent despite China and the Hong Kong governments concession to protesters’ original demand that a new extradition law be dumped. From his exile in Mexico, Morales has called the coup in his country U.S.-backed.

One doesn’t have to look hard to see evidence of U.S. meddling in the affairs of Latin American countries—another hypocrisy given all the hand-wringing about alleged Russian meddling in the 2016 election. President Obama’s secretary of state, Hillary Clinton, backed the brutal regime change in Honduras that has led the killing of some 30 trade unionists there since 2009. Fears grow that Trump will move beyond economic sanctions against Venezuela and eventually take military action to remove President Nicolás Maduro from power. After all, his former National Security Advisor John Bolton told Fox News in early 2019 that “It will make a big difference to the United States economically if we could have American oil companies really invest and produce the oil capabilities in Venezuela.”

Argentina and its new Peronist, anti-neoliberal leaders Alberto Fernandez and Christina Kirchner better keep a round-the-clock watch because the White House and the corporatized foreign policy establishment in Washington, D.C., are not too happy about the departure of their boy, Mauricio Macri, from leadership in that country.

“This is the winter of our discontent,” Richard says at the beginning of Shakespeare’s play. “I am determined to prove a villain, and hate the idle pleasures of these days. Plots I have laid, inductions, dangerous … I am subtle, false, and treacherous.”

Such a confession! Of course, Richard is alone when he says these words, and no one is listening except those of us watching the play from our safe distance.