Rising union membership in the South, a UCW-CWA local at Ole Miss, and remembering Brecht and Weill's "Mahagonny"

(A Green Moon Over Alabama, a book of poetry by Bertolt Brecht, published in the German Democratic Republic in 1975)

Back in the late 1990s I traveled to Jena in what had shortly before that time been Communist East Germany. In a small bookstore in that centuries-old university town I found a copy of poems by Bertolt Brecht, the great playwright and committed Communist whose collaboration with composer Kurt Weill produced such works as The Threepenny Opera and The Rise and Fall of the City of Mahagonny, the latter first published 90 years ago this year and a biting indictment of capitalist greed, hedonism, and corruption that enraged the Nazis back in 1930s Germany.

The most famous song in Mahagonny is the “Alabama Song”, where Jenny, originally played by the great Lotte Lenja, and a group of fellow prostitutes say goodbye to good old Alabama in order to travel to the mythical city of Mahagonny where they’ll find plenty of whiskey, boys, money, and fun.

(To the right, Lotte Lenja)

“Oh moon of Alabama
We now must say good-bye
We’ve lost our good old mamma
And must have dollars
Oh, you know why.”

On the cover of the book of poetry is a depiction of a Southern-style, cigar-chomping political boss surrounded by whores and their drunken clients under ramshackle roofs. A little bit of the South in Old Communist Germany!

I pulled out that volume recently after seeing the latest numbers on union membership in the U.S. South and country as a whole. Membership dropped a bit nationwide from 10.7 percent of the workforce in 2017 to 10.5 percent last year, just half of what it was back in the 1980s.

The good news is that membership rose in parts of the South with Alabama adding more union members—44,000—than any other state! Union membership as a share of the workforce also rose in Florida, Louisiana, and Georgia while holding steady in the region as a whole, according to CBS and the Institute for Southern Studies' Facing South.

We’re doing our part here in little Oxford, Mississippi, where the United Campus Workers Local 3565 of the Communications Workers of America recently organized as a non-collective bargaining “organizing local” formed to represent and defend the rights of all campus workers—from faculty to custodians. Yours truly was one of the original 50 members needed to secure union status.

The union has already been active on a number of fronts, including its members supporting a successful effort to get non-tenure-track adjunct faculty representation on the campus Faculty Senate. It is looking at a wide range of future issues to address—from the availability of child care for campus workers to the gender gap in wages to a possible Living Wage Campaign.

United Campus Workers is growing across the South with locals at universities in Tennessee and Georgia. It was successful in preventing Republican Tennessee Gov. Bill Haslam from a massive privatization effort on the campuses of the University of Tennessee (as well as across state government) in the fall of 2017. Haslam, a billionaire, and a corporate-dominated group wanted to outsource every state facility service job on those campuses, more than 3,500 jobs in the university system. After pressure from UCW, the state’s university system opted out of the plan. 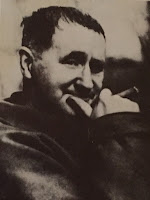 (Bertolt Brecht, from a photo on the back cover of A Green Moon Over Alabama)

The latest statistics on union membership in Alabama and the South probably would bring a smile to the face of Bertolt Brecht, a cigar chomper himself. In that book of his poetry I have is another little song called “Streiklied” (“Strike Song”) in which he urges workers to take the risk to take a stand for their rights. I’m not a commie—my priest wouldn’t put up with it!--but I like the old poet’s spirit.