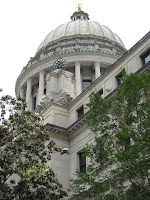 (To the right, the Mississippi state Capitol, where the Legislature meets and where state Rep. Steve Holland gave his speech)

"Unbelievable! Apparently it is your mission (to) destroy this government!" cried my good friend, Mississippi House Rep. Steve Holland of Plantersville, in a fiery speech before the state House of Representatives recently.

What he lamented was the systematic destruction of state government in Mississippi by a Republican "super majority" and Republican governor who just signed into law a "North Carolina"-style discrimination-is-okay bill. The destruction didn't begin with that bill, however. It has been going on ever since Republicans took over, and it has led to seriously underfunded schools and mental health facilities, roads and highways and bridges in desperate need of repair, absolutely gutted workers' compensation protection, yet millions in state taxpayer subsidies to major corporations.

And here is my prediction of all this in a November 2011 column that ran in Mississippi newspapers: