Travels in China, plus a story: Hong Kong's foreign domestic workers struggle for an "ordinary" life while living as an "underclass" 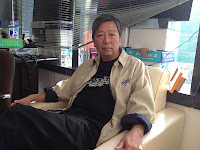