Labor South roundup: Workers in N.C. and Miss. stand up for rights, plus an editorial on Southerners, Labor & the UAW in Mississippi

Here’s another Labor South roundup plus some editorial comments on Southerners, labor and the UAW.

Workers across the South are standing up for the rights as the nation’s two major political parties prepare for their national conventions, both to be held in the region.

In Charlotte, N.C., municipal employees say they are having to work 12-hour days six and seven days a week as the city prepares for the Democratic National Convention Sept. 3, yet they are denied collective bargaining rights as a result of a North Carolina statute.

“The hard work we do is vital for this city to function, so we are asking the City Council to address our needs and rights as workers and to establish a system of meet-and-confer with us to discuss how to keep the city running smoothly through the convention,” said sanitation worker and United Electrical, Radio and Machine Workers of America (UE) Local 150 President Al Locklear in a recent press release from the Southern Workers’ Assembly.

The local has joined with other unions and activists in the Southern Workers’ Assembly scheduled for Labor Day, Sept. 3, opening day of the convention.

North Carolina General Statute 95-98 prohibits public sector workers from engaging in collective bargaining. The statute, North Carolina’s right-to-work law, and the fact that North Carolina is the least unionized state in the nation have led to criticism among labor activists of the national Democratic Party’s choice of Charlotte for its convention.

City workers have been picketing the Charlotte city council in recent weeks in an effort to get it to recognize their basic rights to organize and petition for better wages and conditions.

On the other side of the South, in Hazelhurst, Miss., officials with the Laborers International Union of North America Local 693 held a press conference recently to highlight the poor working conditions at the Sanderson Farms plant in Hazelhurst.

The 700 workers at the plant have to do their jobs in 100-degree-plus temperatures with minimal breaks, poor air-conditioning, and unsanitary bathrooms, Local 693 representatives said. They showed large photographs showing worker injuries as a result of the production demands at the plant.

Media efforts to get company responses to the complaints were unsuccessful.

Some editorial comments on Southern workers, labor, and the United Auto Workers’ effort to organize workers at the Nissan plan in Canton, Miss. 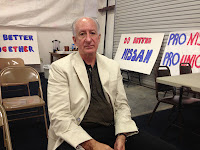 On unions and the South: Labor South agrees with veteran Southern labor organizer Bruce Raynor that the South gets its anti-union reputation from its political and economic leadership, not from its workers. Look across Southern history, from the coal miners in Appalachia to textile workers in the Carolinas, catfish workers in Mississippi, and shipyard workers along the region’s coastlines, Southern workers have shown again and again not only a willingness but a desire to join together, in a union, so that they can speak as one voice.

-       On the labor movement and the civil rights movement: A connection between labor and civil rights has been there since the beginning of both movements—from the sharing of songs such as We Shall Overcome to leaders such as A. Philip Randolph and Walter Reuther who were active in both movements. Here in Mississippi, state AFL-CIO leaders Claude Ramsay and Ray Smithhart worked hand-in-hand with civil rights leader Medgar Evers in the cause for justice and equality, whether at the voting booth, in schools, or at the workplace.

-       What’s important for Nissan workers as they try to organize: Their biggest obstacle is fear. It’s the same obstacle that faced civil rights activists in the 1960s. It seems insurmountable at times, but thank goodness for the courage of Martin Luther King Jr., Medgar Evers, and others in bringing to the nation civil rights for all. The labor movement has its martyrs, too. In fact, too many, and one hopes, of course, that situations never get dire enough that one’s life is on the line. At Nissan, one’s livelihood may seem to be on the line, and that’s scary enough. However, workers’ rights are on the line, too, and those rights are worth fighting for.

-       On the exploitation of Southern workers: Sadly there’s a long history of worker exploitation in the South. What was slavery after all? Free labor, the cheapest labor of all. After the Civil War effectively ended slavery, powerful forces regrouped and turned the Southern economy to another form of slavery, one to perpetual indebtedness in the form of sharecropping and tenant farming. In the aftermath of World War II, just as the South was emerging from its dependence on agriculture and turning to industry, its leaders made sure workers’ rights were not going to upset the applecart of their dominance. Thus we got the Taft-Hartley Act of 1947 and state right-to-work laws across the land.