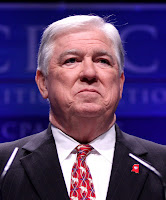 (The accompanying photograph of Haley Barbour is by Gage Skidmore.)

Twice in my life I have heard political experts say these words: “Haley Barbour has no chance.”

The first time was back in 1982 when the then-35-year-old Mississippian and former Nixon campaigner ran for the U.S. Senate against incumbent John C. Stennis, who first took office the year Barbour was born.

Barbour spent a million dollars in the state’s most expensive race up to then, gave the 81-year-old legend a one-two punch on his age—Mississippi needs “a senator for the ‘80s,” not a senator in his 80s, the message went. Stennis was tough, however. After convincing then-President Reagan not to campaign on Barbour’s behalf, the legend KO’d his ambitious opponent in a 64-36 percent vote and in 80 of Mississippi’s 82 counties.

Twenty-one years later, after a hugely successful career as a Republican operative, lobbyist and one of the Beltway’s premier insiders, Barbour ran for governor. Again political experts thumbed their noses. Let me paraphrase: ‘No way are the people of Mississippi going to elect the quintessential fat-cat lobbyist.”

When the bell rang this time, however, Barbour’s opponent was on the mat, victim of a $10.6 million campaign and a very smart politician who sported a pin on his lapel with the Mississippi flag and its Confederate insignia.

After nearly two terms as governor, Barbour is now considering a bid for the presidency, an eyebrow-raiser unless you remember this guy had the chutzpah at 35 to take on a Mississippi giant. “People will identify him with some of the Old South,” Tougaloo College political scientist Stephen Rozman naysayed to the Jackson (Miss.) Clarion-Ledger. “How can he transcend that and have a national appeal where he can connect?”

Unquestioned is Barbour’s mastery of the smoke-filled backrooms. As Republican National Committee chair, he helped engineer the GOP takeover in Congress in 1994. As founder of the Barbour, Griffith & Rogers lobbying firm, he became one of the most connected men in Washington. His firm’s clients included the Swiss government (defending its old World War II-era Nazi accounts), Big Tobacco, Big Pharmaceuticals, former Iraqi prime minister Ayad Allawi, even the Kurdistan Regional Government.

Add Big Oil and Big Chemicals to the list, too, if you include Barbour’s other lobbying outfit, the National Environmental Strategies Company.

As head of the Republican Governors’ Association, Barbour helped raise tens of millions of dollars for GOP gubernatorial candidates.

But behind-the-scenes mastery was never enough for this politician. Thus that Senate race in 1982, that governor’s race in 2003, and now, maybe, possibly, the BIG ONE.

He’s probably the most powerful governor Mississippi has ever had. He turned the state Senate into his private duchy. Only Speaker Billy McCoy and the Democratically controlled House stood in the way of a complete takeover of Mississippi politics.

Still, as a presidential candidate, Barbour would be in a new ballgame altogether.

Every backroom deal would be subject to a new level of scrutiny, even in today’s Fox-dominated media, the kind that he got in 1997 when he had to testify before the U.S. Senate Governmental Affairs Committee about his Hong Kong moneyman pal Ambrous Young and Young’s financial support of the GOP in the 1994 election.

He has a conservative political record that should appeal to Tea Partyers—think of all those calls to cut Medicaid, education, mental health centers in the nation’s poorest state. However, that super-connected résumé, oozing as it does with the money-soaked, favor-currying culture that Tea Partyers as well as progressives despise, could pose a problem.

Then there’s that nagging Barbour penchant for gaffes, going all the way back to 1982 when the New York Times quoted him as telling an aide who used the word “coons” in referring to blacks that he was going to be “reincarnated as a watermelon and placed at the mercy of blacks.” Barbour insisted he was misquoted, but the foot-in-the-mouth syndrome was still there as recently as December when The Weekly Standard quoted him singing the praises of the segregationist Citizens Council in Yazoo City.

There’s the rub. Nobody quotes you in those smoke-filled backrooms.
Posted by Joseph B. Atkins at 6:03 AM