Edwin Edwards, last of the true populists and bane of Southern Republicans, gets a taste of freedom after eight years 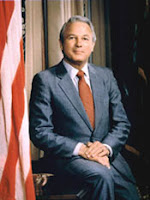 Edward Washington Edwards was one of the most colorful politicians in the post-war U.S. South, a dyed-in-the-wool populist of the Left (the only true populist) and never-ending source of frustration to moralizing Republicans and other conservatives who kept indicting him until they finally succeeded in putting him behind bars.

After eight years in prison on a 2002 bribery and extortion conviction, the four-time Louisiana governor and former congressman entered a halfway house in Baton Rouge last week en route to his long-sought freedom.

The 83-year-old Cajun has always insisted on his innocence and said he was a victim of his political enemies. He was convicted for his role in the rigging of the casino licensing process in his state.

I covered Edwards in the 1980s as a political correspondent whose beat included Mississippi, Louisiana and the South in general. I particularly recall a speech he gave in Biloxi, Miss., October 1984. He'd come to rally support for Mississippi Democrat William Winter's U.S. Senate bid and to lambast his favorite targets: Republicans.

"You can afford to vote Republican when there is no need," Edwards said in his Cajun accent, "but, man, when things are tough, you need a man who is concerned about problems."

Edwards told the applauding crowd that he knew personally what need is. He said he grew up in poverty with no electricity, plumbing or running water in his home. He said his mother was a midwife who delivered 1,800 babies, and he was delivered by his grandmother with a kerosene lamp providing the only light.

And, he added, "By golly, I was the first Cajun Catholic elected governor of the state of Louisiana."