Singapore: a city-state fueled and founded by migrant workers 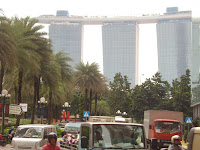 (Here after a brief appearance earlier is my full-length article about Singapore and its migrant workers, relevant to us in the U.S. South, where the issue of migrant workers has raised speculation that yet another "New South" may be in the making. The photograph is of the Marina Bay Sands luxury hotel and casino, cited in the article and a symbol of Singapore's economic prowess. A shortened version of this article appeared in the September 2010 edition of the magazine In These Times. The longer version will soon appear in The Progressive Populist.)

SINGAPORE – W. Somerset Maugham, this city’s most famous expatriate writer, once said this about Southeast Asia’s workers: “These patient, industrious folk carry on the same yokes the same burdens as their ancestors carried so many generations back. The centuries have passed leaving no trace upon them.”

Yet, “in these countries of the East the most impressive, the most awe-inspiring monument of antiquity is neither temple, nor citadel, not great wall, but man. The peasant with his immemorial usages belongs to an age far more ancient than Angkor Wat, the Great Wall of China, or the Pyramids of Egypt.”

Whether Maugham wrote those words in his favorite room at Singapore’s famous Raffles Hotel is uncertain, but what is certain is that they’re just as true today as they were in 1930.

Here in this crossroads of Asian and Western cultures, an economic powerhouse that is a model to the rest of southeast Asia, migrant workers from Bangladesh, India, Malaysia, Indonesia, the Philippines, and China do the backbreaking work that helped Singapore earn ranking recently as the world’s most competitive economy, topping the United States and perennial Asian competitor, Hong Kong.

More than one-third of the workforce in this city of five million is foreign-born. However, many live in crowded, rat-infested dormitories with little relief from the sweltering tropical heat, reliving the conditions that faced the 19th century immigrants from China who largely built Singapore.

“Singapore may be seen by some as a model in ways that are not so good for workers,” says John Gee, president of the Singapore-based Transient Workers Count Too (TWC2) organization. “It has made some reforms, shown a real commitment to countering the worst abuses of workers, but this still leaves a long way to go. We’d like to see a new relationship worked out, with a minimum wage, a weekly day off for domestic workers by law, overtime pay, limits on working hours.”

There’s no minimum wage in the 24th most expensive city in the world, and wages actually declined from a median monthly level of 1,389 Singapore dollars (approximately 1,000 U.S. dollars) in 1998 to 1,270 in 2008. Singaporeans have less purchasing power than the citizens of nearby Kuala Lumpur, Malaysia, yet with an unemployment rate of 2.2 percent immigration has doubled over the past 10 years.
Singapore has emerged from its worst recession in history with 15.5 percent growth in the first quarter of this year. Manufacturing, 25 percent of the economy and led by the electronics and biomedical industries, was up 32.9 percent.

The city’s skyline rivals those of Chicago and Hong Kong, and it now includes the $7.8 billion, 55-story three towers of the Marina Bay Sands luxury hotel and casino with their connecting 2,500-acre sky terrace. Long one of the Pacific Rim’s economic “tigers,” the city pulses with energy from its financial district down to its busy ethnic enclaves with their Buddhist and Hindu temples, Moslem mosques, and vendor and shophouse-lined streets.

Yet this citadel of neo-liberalism reserves most of its rewards for those at the top end of the economy. The wealthy pay just half in taxes what their counterparts in the United States pay. Already-low corporate taxes were cut even lower during last year’s recession. Sales taxes, on the other hand, have risen from 4 percent in 2003 to the current 7 percent.

“The government keeps raising (sales) taxes, putting pressure on people, particularly small businessmen,” a convenience store owner in western Singapore complained to me. “You have to work very hard to make it. You have to get up early and go to bed late. People are scared to speak up. Even the rich are scared to say anything or they will lose what they have.”

Ang Peng Hwa, who heads the journalism program at Nanyang Technological University here, says the influx of immigrant workers has kept wages low while “the differential between the wealthy and the poor is growing.”

Workers have no real means to protest their conditions. Under the semi-authoritarian, half-century rule of the People’s Action Party and modern Singapore’s founder and current minister mentor, Lee Kuan Yew, any kind of protest is strictly limited. When the International Monetary Fund convened here in 2006, no outdoor protests were allowed.

Remember this is the city where American Michael Fay was famously caned for theft and vandalism in 1994. The Singapore Police are notoriously tough. No jaywalking, and no eating and drinking in the subways. Graffiti artists face up to three years in prison--plus the cane--if they get caught.

“Outdoor protests of the kind we see in the rest of the world are largely banned,” says Radha Basu, a senior correspondent with The Straights Times, Singapore’s major newspaper, and a frequent writer about migrant worker issues. “Impoverished migrant workers who are desperate to remain in Singapore to earn decent salaries don’t generally protest (although) there have been cases where groups have thronged (Ministry of Manpower) headquarters to complain about non-payment of salaries.”

Gee says workers should be able “to speak up for their own rights without fear of being sent home by their employers in order to shut them up and frighten others. That would make Singapore into a much better model to follow.”

Of course, many Singaporeans credit Lee Kuan Yew for raising the city from Third World to First World status. Lee, at 86, is officially retired, but he remains a formidable presence not only as minister mentor but also as the father of current Prime Minister Lee Hsien Loong

“Lots of foreigners come here to work,” 55-year-old taxi driver Abo Rhaman B Abo Samad says. “Everybody has a job if you’re not too choosy. I was a security guard making eight hundred to nine hundred (Singapore) dollars salary. I had to upgrade myself. Now I make four thousand a month.”

As for Lee Kuan Yew, Abo says, “He’s a smart man, a swell leader, a great leader. We have nothing, no natural resources. This man took us out of nothing.” Lee’s critics “are stupid. They haven’t been to Myanmar (Burma), or to Thailand where they are fighting.”

Indeed, over the two weeks I recently spent here, the streets of Bangkok turned red with blood as Red Shirt protesters raged against the government. North and South Korea rattled sabers over the sinking of a South Korean warship. Worker suicides and bizarre attacks on children and women revealed the dark underside to China’s economic boom. During my visit, Indonesian police raided a terrorist hideout in Jakarta and found plans indicating that one of the subway stops I used everyday was a bombing target.

The growing unrest among workers in China, India, and other countries is watched closely. Nearly 2,000 workers for Honda in China’s Guangdong province, went on strike in mid-May, shutting down production at the company’s four plants there. They were protesting low wages and poor working conditions. Workers at the Hyundai plant in Chennai, India, shut down operations there, too, in June. A rash of suicides by workers at Foxconn Technology’s plants in Shenzhen, China, prompted the company to raise wages twice within a single week—first by 30 percent, and then by 70 percent. Foxconn makes electronic components for Dell, Apple and other companies, including Apple’s iPhone and iPad.

Singapore’s National Wages Council has proposed that workers’ wages in the city-nation also be increased, and analysts predict they will rise as much as 5 percent this year. The city has also taken some action to improve workers’ living conditions, moving close to 20,000 last year to better facilities and increasing inspections. Fines against slumlords officially can be as high as $5,000 plus six months in jail, but in reality fines were as little as 200 Singapore dollars in 2009.

“Employers are responsible for the upkeep and maintenance of their foreign workers, including the provision of acceptable accommodation,” says Joann Tan, a spokeswoman with Singapore’s Ministry of Manpower (MOM). “To speed up punitive action against errant employers, MOM is considering raising the amount of composition fines imposed on employers for housing their workers in unacceptable conditions.”

Despite the city’s long history of immigration, a backlash against migrant workers is growing. Native Singaporeans resent blue-collar immigrants for keeping wages low, and they resent white-collar immigrants for taking away jobs. “Some quite venomous anti-migrant worker statements may be heard in casual conversation,” Gee says. “It is easy politics all over the world: blame the foreigner. None of the opposition parties speak up for them, as they see that as a vote loser.”

Journalist Radha Basu agrees. “Foreign workers in Singapore are increasingly being blamed for all kinds of ills—from low wages to crowded transport system to soaring property taxes and even petty crime.”

Yet, Gee says, “the construction sector would grind to a halt without migrant workers; likewise, the shipyard sector. Probably cleaning services would be badly hit, too. Migrant workers provide a substantial minority of the workforce who drive buses, work in shops and restaurants. One in six households have domestic workers. … Despite lots of complaints by sectors of the public about the presence of foreign workers, most people know that if they were excluded tomorrow, it would be catastrophic for the national economy.”

In other words, the peasant worker still has “his immemorial usages,” and he still builds the temples and citadels, but he rarely gets to enjoy them.
Posted by Joseph B. Atkins at 7:22 PM