News coming soon from Singapore as well as closer to home 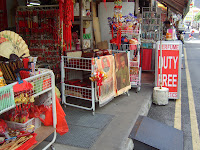 (To the right you see a photograph from Singapore's Chinatown, shops featuring everything from duty free goods to posters of Chairman Mao)

I'll be returning from Singapore Tuesday, May 25, and will soon thereafter have a report on issues here in Southeast Asia that are remarkably similar to those we face in the U.S. South--a growing gap between the rich and poor, the plight of immigrant workers, tensions between rural and urban dwellers.

There is a hotbed of activity over here with bloody demonstrations in Thailand, saber-rattling between North and South Korea, knife attacks on children and students in China, resentment against U.S. military presence in Okinawa, and tensions everwhere regarding the effects of U.S.-style capitalism on society.

Today I visited an exhibition at the Singapore Art Museum on social realism in Asian art, and I discovered a strong tradition of artistic sympathy for and insight into working people and their struggles that reaches far beyond the usual Marxist dialectics and debates. I talked with workers and intellectuals here about Singapore's unique status as a city-state with essentially one-party rule, a long tradition of ethnic diversity and toleration, and a nervous eye toward the various tensions that surround it. It's a fascinating place, and you'll be getting the full report very soon, as well as updates on the catfish workers' situation in the Mississippi Delta and other issues closer to home.
Posted by Joseph B. Atkins at 7:07 AM