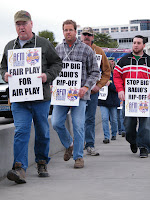 (Here's a piece by Chris Marston, whose contributions to this blog you're going to see more often. A native of Mobile, Ala., who now lives in Bay Minette, Ala., Marston is a veteran labor organizer and writer who has been in the movement since joining Local 18 of the Industrial Union of Marine and Shipbuilding Workers of America in 1972. After serving as a shop steward and editor of the labor weekly Gulf Coast News Digest, Marston became an organizer with the International Ladies Garment Workers Union in Alabama and Louisiana. Active in the South as an organizer and writer over the next decade, he joined the national staff of the AFL-CIO in 1989, worked with Solidarnosc in Poland, wrote the widely used AFL-CIO unemployment survival manual, When the Paycheck Stops, and helped bring the Community Services liaison network into the movement, training hundreds of staff.

In the piece below, Marston reports from Las Vegas about a subject important to working musicians in studios from Memphis to Nashville to Muscle Shoals to New Orleans.

LAS VEGAS, Nev. - “Many of the most popular and famous recorded songs of the last four decades were performed by hired studio musicians, often for as little as $50 for the entire recording session. Now many of these musicians who made the music of our lives are old and ill, most with no pension or health insurance. Big Radio made billions off of the music they created without sharing a dime in royalties. That’s the injustice the Performance Rights Act (PRA) seeks to end.”

Mary Wilson of the Supremes, looking very much like she did when she wailed behind Diana Ross during the golden years of the all-time Motown girl group, had this and a lot more to say to the media in Las Vegas on Tuesday, April 13. Mary joined the star and musical director of the biggest musical in Vegas, “Jersey Boys”, and representatives of the American Federation of Musicians and musicFirst, the coalition of musicians, performers and labor organizations, at a midday press conference to promote the PRA.

Statements of support from entertainer Jerry Lewis and from AFL-CIO President Richard Trumka were presented to the media in addition to a review of the issue and the resolution proposed by the Act, drafted by Michigan Congressman John Conyers. The Obama administration actively supports the Performance Rights Act, which is in committee in both houses of Congress.

Not surprisingly, the powerful National Association of Broadcasters and Clear Channel, owner of most the nation’s larger radio stations, lead the opposition. The NAB hosted their annual convention at the vast Las Vegas Convention Center last week. The thousands of American and foreign delegates were treated to lengthy diatribes against the PRA in all the public policy plenary and workshop presentations. musicFirst and the Musicians mounted a colorful and musical informational picket at the convention center’s main entrance on the Monday before the Tuesday press conference. A five-piece union band played Dixieland tunes for the 50 dancing pickets, to the delight of passing motorists, while a large billboard truck depicting “Piggie Radio” as a large hog circled the adjacent streets. Picket signs and handbills distributed by union members from the Laborers, the Screen Actors Guild, CWA, Operating Engineers and Musicians called for “Fair Pay for Air Play” to “Stop Big Radio’s Rip Off”.

Clear Channel stations are pounding the PRA on their stations across the country, distorting its provisions and claiming to defend small stations.

Put simply the PRA would require big terrestrial radio broadcasters to negotiate with musicFirst for payment of an annual amount of fair royalties to musicians. Under current law, only the songwriter or copywriter receives royalties. Christian radio would be exempt and college and small local stations would pay only a nominal annual fee. Satellite, digital and TV stations already compensate musicians for broadcast of their work. European radio has been paying similar royalties over the 40 years Big Radio has been exempted in America. “Being fairly compensated for one’s work is a fundamental human right,” said AFL-CIO President Richard Trumka, in Las Vegas for a major immigrant rally on Saturday, April 10

Very few Americans are aware that musicians aren’t fairly compensated for broadcast of their recorded work, which so enriches the lives of us all. Learn more and sign a petition to Congress to pass the Performance Rights Act at www.musicfirstcoalition.org
Posted by Joseph B. Atkins at 2:35 PM